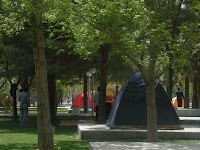 Iran has been a walk in the park so far, with most of our time literally spent in the parks of the different cities we've visited. None of that boring searching for hotels with parking spaces big enough, just head straight for what looks like a green area on the map. And we have not been lonely! Because of No Ruz (Iranian new years celebrations), it seems half of Irans 70 million people are out camping and picnicking, utilizing every single piece of greenery available. The parks becoming like a camping areas at a festival, with just a few major differences:
1. There are no drunk people, and a lot of children who stay up all night.
2. The toilets are nice and relatively clean.
3. The sound of men singing about Allah early in the morning.
4. All tents are pitched on the pathways instead of on the grass.
5. Guards walking around making sure that the women are dressed properly.


In Yazd we were served soup, nuts and sweets by friendly people who just wanted to make the people camping in the park feel welcome. One of the soups had some sort of intestines in it (camel?) and smelled like cow dung, but such details are easily forgivable considering the immense hospitality.

In Eshfahan we followed the Iranian tourists example of having a real, big picnic in the park, gas stove and all. After India the lack of audience somehow feels weird. But man, what 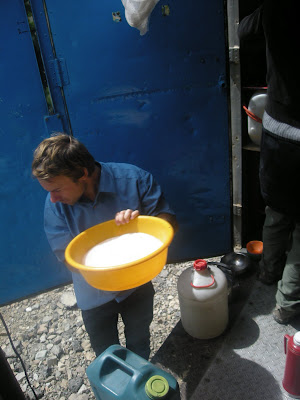 a great feeling finally not to stick out when doing the dishes and cooking outside. The only thing original about us here is the amount of spices in the food, and the odd male cutting vegetables or washing up.

North of Tehran, on our way to a ski resort in the mountains, the bus decided it had had enough. All sorts of things broke down (ok, it's basically the waterpump, and this thing that was covering the fan), and the sounds coming from the motor were not those of our usually happy, content Attila. We had to stop. Right in front of a tunnel, in a rather gritty place along the road. Luckily it turned out that there were some neighbours. An allways smiling Kurdish road worker with a big mustache and his two dogs. We weren't sure why exactly we couldn't put up a tent, but when we realized the next day that the sign language from the night before was not trying to describe the cold weather, but was referring to the three wolves living in the area, we were quite happy that we all slept in the bus. Odd male doing dishes --->

Our neighbour has spent most of his time drinking tea ans chatting (in sign language and Farsi) with us, as well as driving us around and calling mechanics and giving us food and tea. We are not really SURE about what we are talking about, but the communication somehow seems to work, anyway. We have given up English, following our new friend's example of sticking to the language we know best, and just assume that anyone will understand. He speaks four languages, none of which we understand. Still we manage to talk, about his family, background, the men with beards (who seem to symbolize everything that is bad in Iran), Kurdestan (very nice), his dogs (Jack and Joe), vodka and whiskey (nice, but the beard people don't like it), something about someone getting shot (also something to do with the bearded people), and how we are perfectly safe staying in the bus (because if some bearded person comes to hassle us, our friend will be there with his Rambo knife) 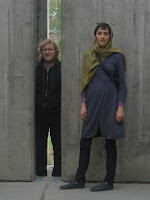 At the moment some of us are in Tehran city meeting good people (among them Thale and Michaels friend Nazgol, artist from Tehran, great girl), seeing art and drinking coffee in Tehran's old, marvelous cafes, while some people are (hopefully) watching the bus, others out looking for spare parts. We are not yet sure how long we have to stay here. Personally I have taken a liking to the city, and don't really mind staying for a while.
Torkild and Nazgol in an extremely symbolic picture about gender issues and Iranian society ---->
Before the 13th, we must be out of the country though, as our visas runs out. And, admittedly, that first Amenian beer will taste quite nice after losing all of the excess clothing worn in Iran.