Bishkek is the Capital of Kyrgyzstan. Until a few years ago it was called Frunze, named after a bolshevik hero. Since the new rulers are not very bolshevik they gave the city its new name almost similar to the old name Bishpek.
We have spent a couple of days here at a truck park. It's a bit funny how we always end up at such places. It may have something to do with our habit of arriving places late in the evening with a big bus. Anyway, it's a nice place. A bit shabby but with nice and helping people. We have had some time to build more furniture in the bus. Yesterday we played football with some of the truck drivers. Some of them even spent the whole evening with us, jamming and singing kyrgyz folk songs for us.
There has been some time for the usual holiday activities as well such as visiting local bazars, looking at the President Palace and bla bla. Most exiting was a trip to the local banja, a kind of public bath with sauna. Since foreigners seemed not to be very common at this place, we got a lot of friendly attention and good advice. Two hours later we came out of the place cleaner than any of us have felt ever before. At least more clean than we have been since we left home.

When we came to Bishkek we were met by the only Norwegian living here, Ivar Dale. He gave us a guided trip through the uptown part of the city's nightlife. We ended up at Bishkek's most posh place, were a band played cover versions of early 90's hits. 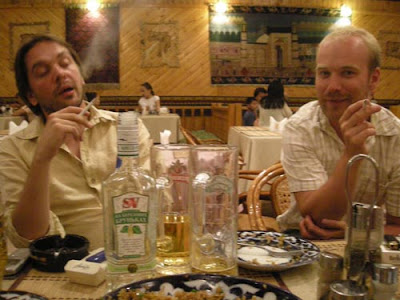 Mr Dale, the very helpful man, has offered us to use his office to do some research on the Pakistan business. Therefore we will stay here a couple of days more than we had planned. We hope to get back to you with more info on our route in the next days.

Andreas comes to town on Tuesday, and then we head towards the mountains south east of Bishkek, on the way to China. 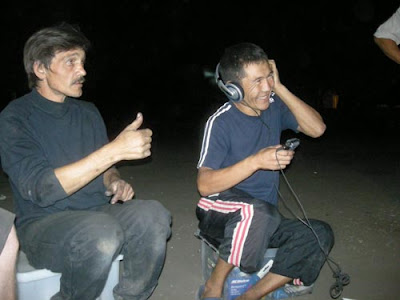 We have added some new pictures to the blog. Scroll down a bit to find them. More pictures coming up soon.

Ps: I`m adding a couple of photos, one from our fantastic Central Asian dinner with Ivar, a night that ended in splendor at a posh nightclub dancing to the music of the Kyrgyz band "Liquid Cactus". The other one taken from the back door of the bus, and depicts two of the guys we`ve been hanging out with at our current truck stop. It`s a good place, with nice people running a café, and a truck driver called Russland who plays guitar as well as the local Kyrgyz three stringed thingy I can`t remember the name of at the moment. The two guys on the picture are listening to a recording Torkild made of Russland playing. Thank you Bishkek, thanks Ivar and Alina, thank you Angela who washed our clothes, and thanks to the friendly truck stop people (especially our young friend Roskilde). Now on to the beautiful lake Issyk-kul. Ingrid
Posted by Anders ___on Sunday, September 16, 2007