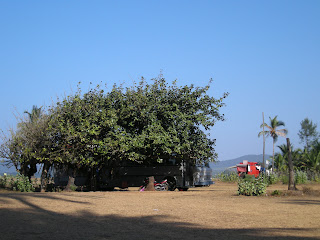 For the first time during our travels, we have found a small community of overlanders at Agonda beach in southern Goa, and stay at a real camp site. And it's great. Our closest neighbours is an italian family we met in Pochara, Nepal. Experienced travellers who have been in India many times since the early 90's. They claim Agonda is the last paradise of Goa, and that might well be right. The palmfringed beach about 50 metres from the bus even has a good surf at times. Not that we surf, but we sure like jumping about in the waves. The biggest problem we have is the cows, who eat anything, including our books if left out.

Life here consists of swimming, reading, writing, discussing ideas, cooking food and doing the dishes, fetching water from the well, and drinking a little bit of that ol' Kingfisher of course. And trying to get the sand out of the bus. Last night Atilla filmclub showed a horribly low quality chinese DVD version of the first Harry Potter film, a very popular initiative especially among the children living close by. When our electricity went out, a neighbour happened to have a generator. And when the cheap DVD finally gave in, another neighbour came running with another copy of the same film! During the unplanned intermission we had some really tasty brownies, comming all the way from Astrid Knutsen in Nissedal, Norway. Thanks! 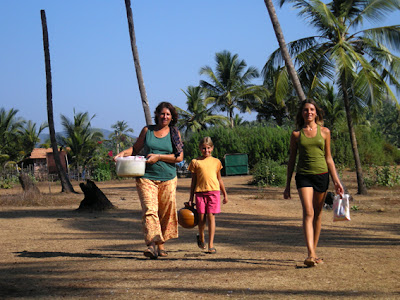 Our Italian neighbours have finished the laundry of the day. 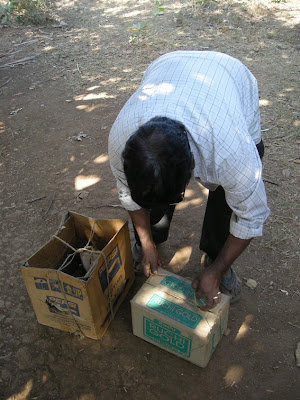 This guy comes every morning selling fresh cakes and bread. Brown bread, even! 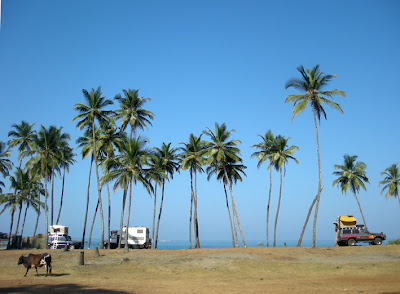 View towards the sea.