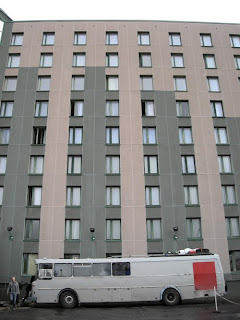 We drive into Murmansk at seven in the morning. On arrival we check in at Hotel Polyarnye Zory, a hotel named after a city a few hundred kilometres south of town. The Scandinavian flags outside the lobby show clearly that we are not the first Norwegians here. Some of the receptionists even speak a bit of Norwegian and Swedish. As long as you can tolerate loud techno and Russian pop with your breakfast-pancakes, this hotel is a good alternative. After having the hotel`s breakfast for supper, we head to our rooms for a good day`s sleep.
When we get up in the afternoon we are ready to have dinner for breakfast, and ask the receptionists for advice. Their suggestions are way too exclusive however, so we let Lonely Planet guide us to a pizza place called Mama Mia. The restaurant hands out pizza with reindeer tongue and jam as if it was the most natural thing in the world. The biggest success however, was the dessert-pizza Grandioso; cheese, assorted fruits, nuts, ice cream and whipped cream. After beer and vodka in the hotel bar, we head for our beds again.
The city of Murmansk is situated by the Kola Bay and boasts the northernmost ice free harbour in Russia. Thus it constitutes a point of great strategic importance, and is perhaps particularily well known for the large number of atomic submarines stationed here during the Cold War. The boats are still there, though most of them are hardly in sailable condition any more.
After a few harsh years, the city seems to be more or less on it`s feet again. The streets are filled with young people in fancy clothes, older people in shiny cars and hords of Finnish tourists.
Some of us comment on the huge contrast between the well dressed and seemingly well fed people, and the run down residential areas. The old trolley busses contrast the shiny new SUV`s in a similar fashion.
After sleeping off the vodka, we get ready to leave, and Attila the bus gets a check-up. It has received a good beating on the road from Kirkenes to Murmansk. Bj¯rn Kjetil shows his newly aqired mechanical skills, and fixes an air leak in the break system. An electrical chord also needs to be attended to, in order to get the sidelights on the right side working again. Also, the body got pushed about a bit, driving across some big bumps on the hellish roads of last night. As a result, the door is not closing properly- but this repair has to be saved for later. We head for the Russian forests again.
Anders (translation-Ingrid)
Posted by ping ___on Friday, August 24, 2007