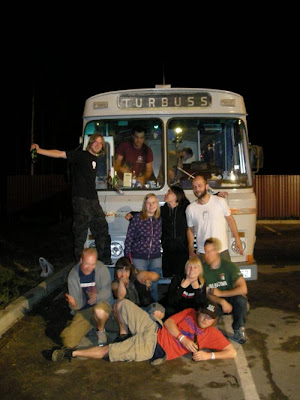 Petrozavodsk means "Peter's factory". The city was founded by Peter the Great in 1704. At the time he was at war with the Swedes and needed a city in Karelia to supply his army with arms and ammunition. Apart from the odd tractor, the factories in Petrozavodsk produce little metal today. The city is now dominated by students from the two local universities, as well as quite a number of Russian and Finnish tourists who promenade along the shores of the great Odega lake. We follow their example, and Maxim guides us through the city and down to the lake. Maxim also organises showers for everyone. Bj¯rn Kjetil, Torkild and Anders shower at Troll`s place, while the rest of us are catered to in Maxim`s appartment.
In the evening we invite Maxim and Tanya for dinner in the bus. Guro and Morten learns how to cook "pillemini", a russian dish similar to tortellini. Maxim has a Ukrainian hitch-hiker visiting who makes "dibosjr" - the official Russian hitch- hikers’ coctail. It contains canned, condensed milk, sugar, instant coffee, water and vodka. All of them supposedly ingredients every Russian hitch-hiker carries around in his backpack.
After a long and good day free of driving we go to bed on full stomacks and a bit tipsy from the vodka.
Anders. (translation-Ingrid)